Last year I did a little electromagnetic antenna simulation for a project of mine. Actually, I just operated an existing simulator, a piece of software called Numerical Electromagnetics Code which hails from the 1970s and originally written in FORTRAN. This incarnation I am running is called cocoaNEC written for MAC OS X by Kok Chen, W7AY.

Recently one of my Ham radio friends is moving to a new building, and I volunteered to help do some simulations for a few candidate antenna installations at his new location, or QTH in Ham radio shorthand: Q-signals.

The antenna he plans to use is called a G5RV, a special dipole designed in 1940s Great Britain by Louis Varney, G5RV. Using cocoaNEC, I was able to model the antenna and estimate the radiation patterns. He’s still evaluating the results and we are discussing other antennas to evaluate. Now that the mechanics of running the simulations are understood, it should go smoothly (famous last words).

Legacy code like the NEC that has been around since the 1970s carries a lot of baggage. One thing is the quaint method of data input using punched card data format.

This isn’t quite as great as it sounds at first. While the core electromagnetic calculations are the same, the interactive portions of the program are like three separate programs in one. If you create an antenna using one method, you basically have to stick with that method (all methods can WRITE the antenna simulation in punch card “deck” format, but this isn’t very helpful unless you are exporting your design to another NEC analysis program)

Because this punched card format is the common denominator of all NEC-based programs today, many online examples of antennas will be in this format. I found such an example of a G5RV antenna, and after some time I came to realize the above problem. I just gave up and recreated the antenna using one of the modern formats.

After briefly reading the documentation, I decided on the NC format. I’m a C-language programmer, so it should be easy. It was, in fact, quite easy to model this antenna using NC. But I soon began to regret that choice.

With an NC model, you can tweak the variables in the program code, much easier than you could with a deck of punched cards! However in NC mode, cocoaNET’s GUI program doesn’t give you control over this tweaking, despite having an excellent interactive GUI for tweaking your antenna when in the depreciated spreadsheet mode. There is no way to convert from one to the other (I did confirm this with the author).

I was constantly editing the NC file and re-running the simulator. I couldn’t figure out a way to run the simulator from the command line (I’m waiting on feedback from the author), which would have made it much simpler. If I was going to be doing this seriously for hundreds of tweaks, I would figure out how to script this, or find another command-line version of the NEC.

But this frustration aside, I am truly impressed with this program. It was easy to get started using, and the author has done an admirable job putting this together for MAC users. Here’s a sample gain plot of the G5RV. Now that I have the basics figured out, it’s time to experiment some with different variations of antennas. 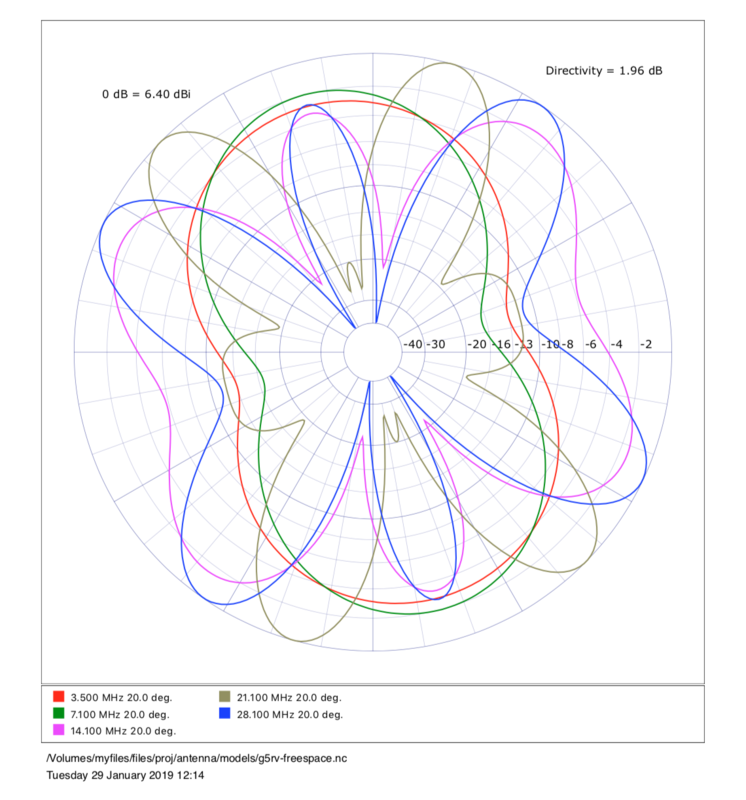